Austin, TX – The story of MaryAnn Fausey Resendez will bring tears to your eyes. The single mom from Texas couldn’t hide her despair and frustration. People criticized her for bringing her daughter out in public. But that was the only option for the lady. She had to take the kid to the supermarket because there was no one to look after her. The criticism didn’t stop so the mother had to place a sign on the girl’s back.

“I am only five,” the sign read. “I can’t stay home alone so I have to buy groceries with mommy… Before you start judging stay back 6 feet.” 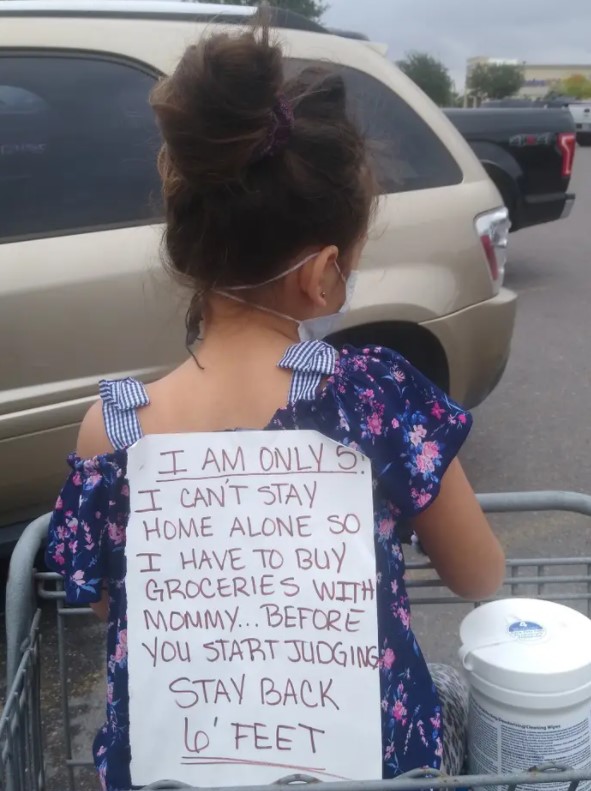 The mom also shared details of the fourteen steps she and her daughter take every time they make a trip to the supermarket. They wipe down the shopping cart and sterilize the items they buy from.

MaryAnn Fausey Resendez isn’t the only one

Canadian mother Melinda Galant had a similar experience. She shared a photo of herself. Yes, she is crying. Her trip to Costco turned into a nightmare.

“If anybody has ever wondered what defeat looks like, here it is folks,” she posted. “This is the look of a single mom during a pandemic.”

If anybody has ever wondered what defeat looks like, here it is folks. This is the look of a single mom during a…

Shannon Christensen, the founder and CEO of an organization called Mamas for Mamas, spoke on behalf of the moms who fall “through the cracks.”

“They are single. They can’t leave their houses without their children. What are they supposed to do? They’re damned if they do and they’re damned if they don’t,” she explained. “If they stay home and don’t have enough food, then they’re neglecting their children. If they are taking them out in public, then they’re being reckless. There’s no way to win as a single mom during the pandemic right now.”

Single parents are criticized regularly. Well, these people don’t really have a choice. Taking their children everywhere is an inevitable part of their daily routine. Instead of shaming others we need to step in defense and offer our help.

Stay Home for those who are unable to do so

Whitney R. Robinson is an epidemiologist at the University of North Carolina’s Gillings School of Global Public Health. She explained that people who can stay in their homes should definitely do that for those who had to leave their homes.

“The public health message is not just to protect yourself but also to isolate for the people who can’t isolate,” she said. “ You are trying to break a chain” and, in doing so, reduce the risk for essential workers and others who still need to have contact with the outside world.”

Supporting single moms and dads is really important right now. These people have enough problems even without your criticism. Do something good for these people and make life a little easier for them.

In Bear, Delaware This Teen Day Care Worker Charged With Murder After Surveillance Video Allegedly Showed Her Taking an Infant’s Life
Florida mom asks teacher to be fired after her son was ‘Attacked’ at school and the teacher reportedly did Nothing to stop It