In a heartwarming moment, World No.1 Rafael Nadal served up a kind gesture to a ball girl after hitting her on the head during his 6-3, 7-6(4), 6-1 second-round victory over Federico Delbonis at the Australian Open 2020.

In the fifth game of the third set, Rafa unintentionally hit a ball girl with a rogue backhand on a long serve from Federico. However, the 19-time Grand Slam champion made up for his misplaced shot when he rushed over to make sure that she was okay, and gave her a gentle kiss on the cheek.

There was a lot of cheering from the crowd at the Rod Laver Arena when she resumed her duties the following point.

After completing the match, Rafa shook hands with Federico and once again checked on the ball girl, giving her his bandana along with another heartfelt apology. 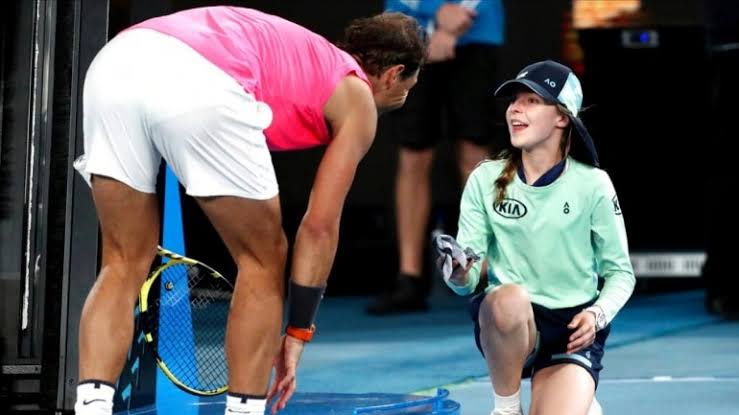 Awwwww… Rafa is such a sweet guy, isn’t he? But it’s not just us who think so — the 33-year-old was also honored with Stefan Edberg Sportsmanship Award at the 2019 ATP Awards, which was his second straight year and third time overall to receive it for his fair play, professionalism and integrity on and off the court during the calendar year.

In the post-match on-court interview, he said:

“First time playing in the evening here, different conditions. Tough match, I lost a lot of opportunities on the breakpoints. But I found a way to win the second set and I played more relaxed in the third.”

The No.1 seed will next face his compatriot and No.27 seed Pablo Carreno Busta in the third round of Australian Open 2020.

RELATED:
The Coach Behind The GOAT, Patrick Mouratoglou Reveals How His Greatest Weakness Became His Greatest Strength
Continue Reading
Advertisement