I’ve played on dozens (and dozens) of tennis courts all over Texas and Louisiana, and in my opinion, they’re pretty standard. Even the courts at the most elite country clubs lack a certain je ne sias quoi… a “cool” factor; but that doesn’t mean they don’t exist.

On my internet quest to find the grooviest of courts, I came across 17 of them, which for me fit the bill; and here they are in no particular order:

“Emerald Cay “, a private estate located in the Turks and Caicos Islands 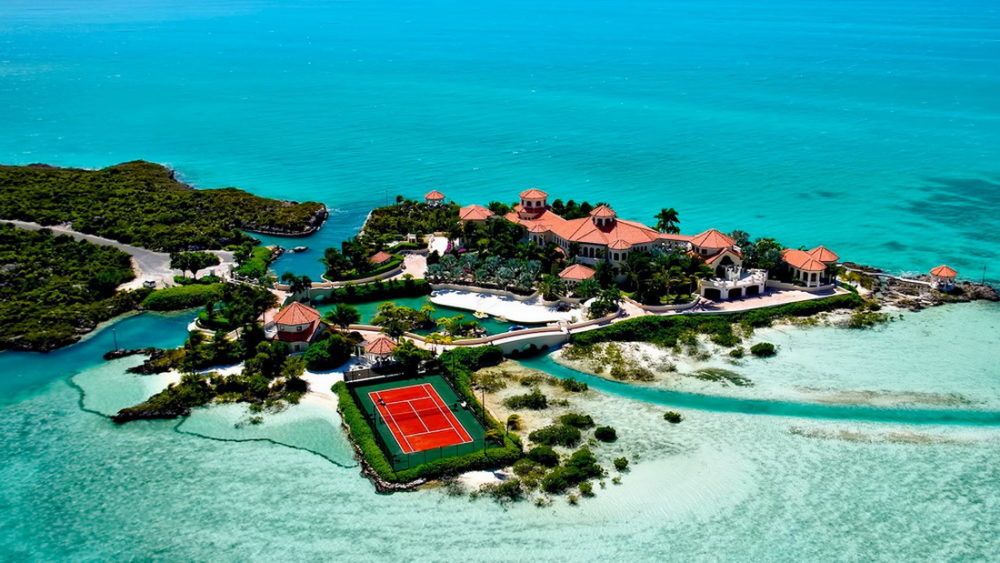 How would you like to play tennis on this beautiful court, surrounded by the Caribbean Sea? It’s totally do-able on this gorgeous privately owned island, Emerald Cay (pronounced like ‘key’), located in the Turks and Caicos Islands near Cuba. 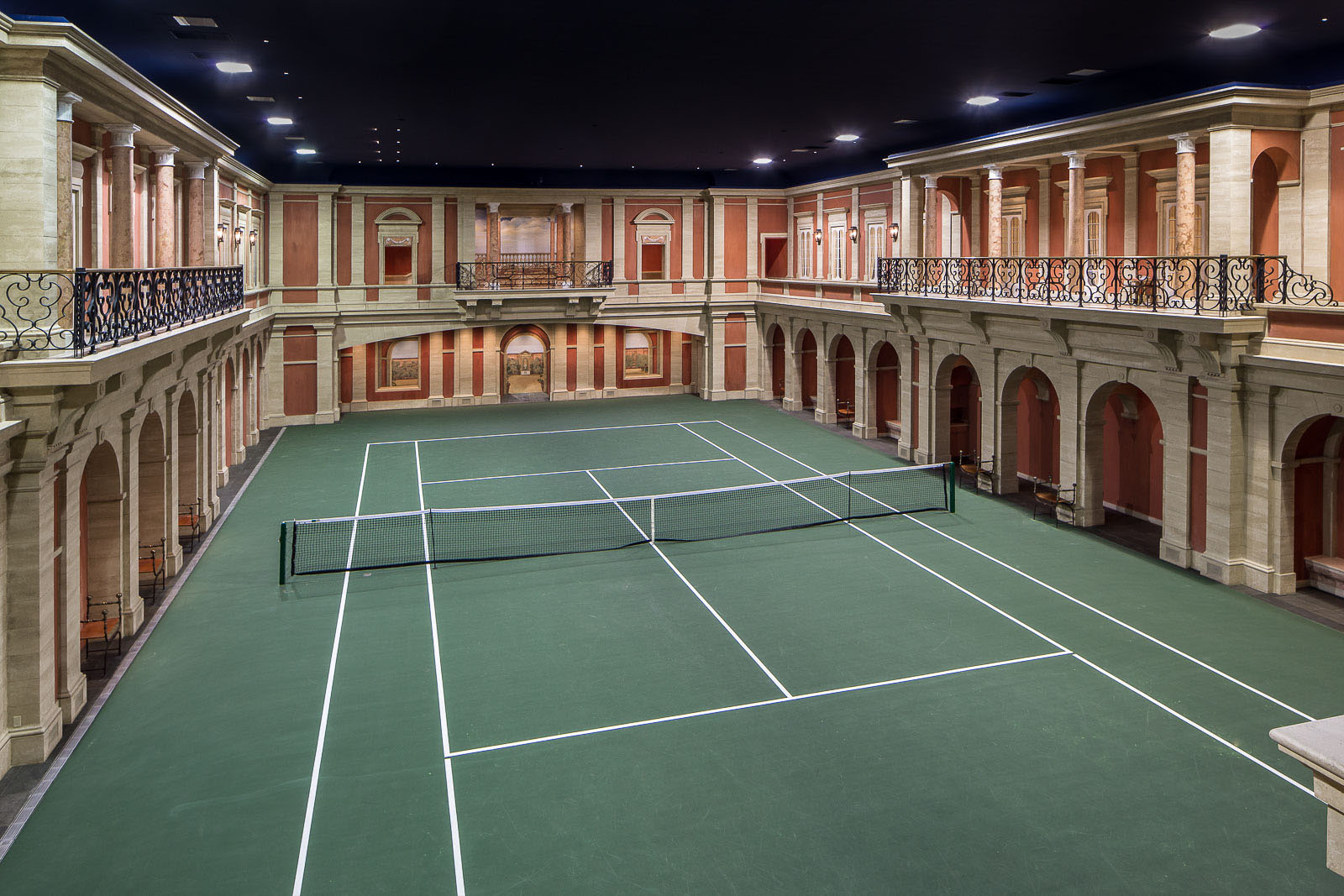 Here is another privately owned piece of paradise located in the Los Angeles suburb of Rolling Hills. This home is definitely for the tennis lover, as it has not one, but TWO tennis courts. This is the hard court, built 5 stories down inside the home and designed to exact US Open specifications. Former champion Pete Sampras even played on it as a house guest. 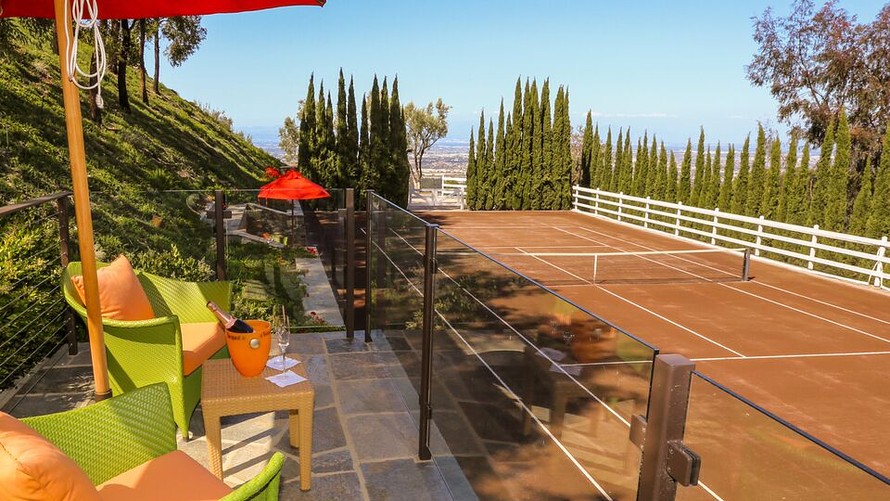 The second court isn’t necessarily one of the coolest courts, but the fact that it’s the second of two private courts for the same residence makes it pretty cool to me! It’s located on the sprawling grounds, with a bad-ass view of Los Angeles. This one is designed to precise French Open specifications.

A rooftop in Paris, France

OK… So this one is more artistic than it is authentic, but it’s totally cool – and unique! For his Starno City, artist Arno Piroud creates amusing interventions such as this tennis court painted onto a Parisian rooftop. Piroud’s focus is on putting “fiction into reality” as he makes “contemporary art about the city.” There used to be an online map of Paris showing the locations of all of his other works of art, but all I can find now is this interesting video. If you live in Paris, or if you visit one day, maybe you’ll have the pleasure of seeing some of his art. 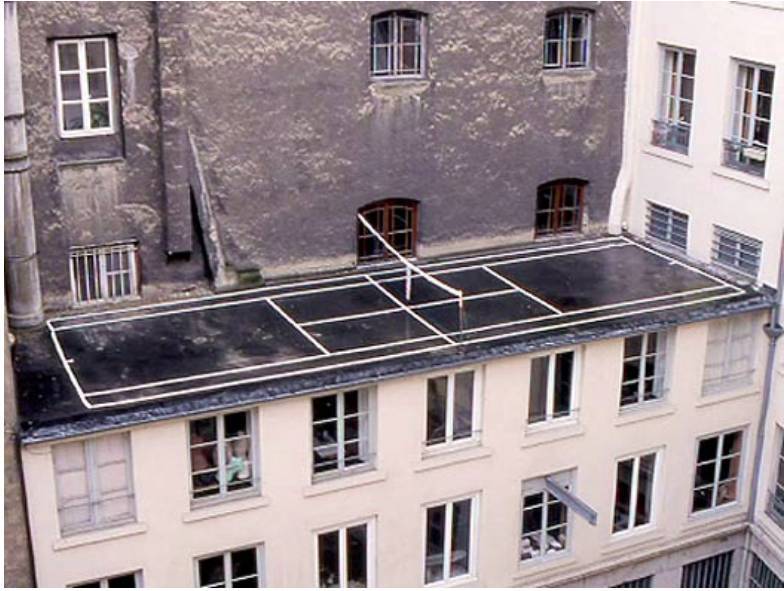 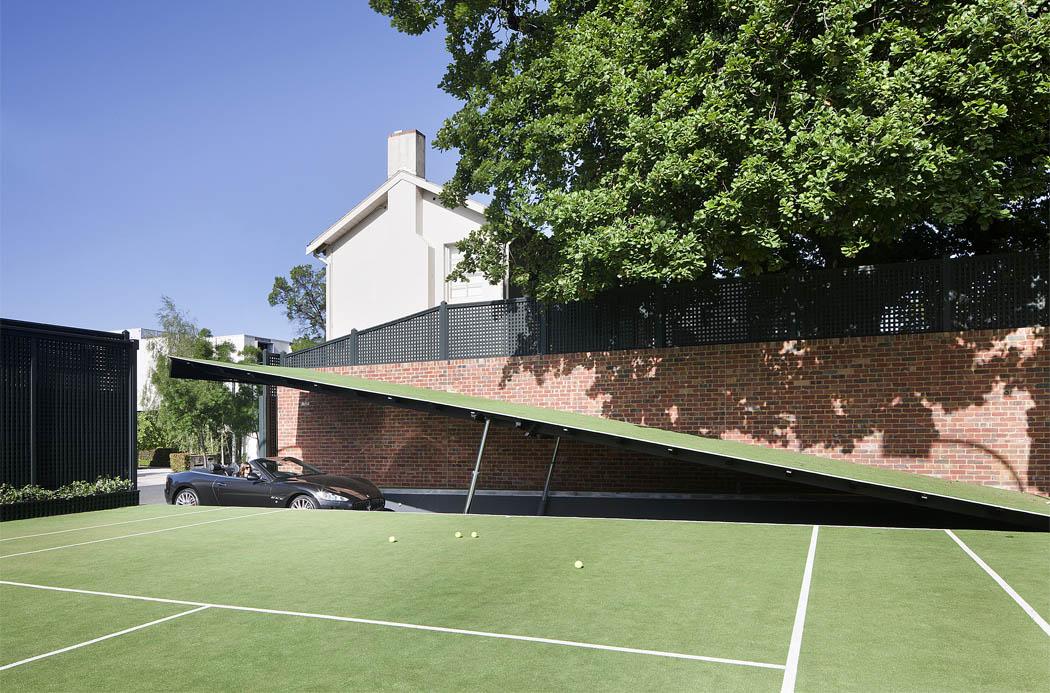 Toorak, Australia is the location for this clever court, nicknamed “The Wayne Residence”, after Batman, of course. Down below it’s carpeted surface is the “Bat Cave”, which is home to the owner’s numerous luxury cars… Nice! 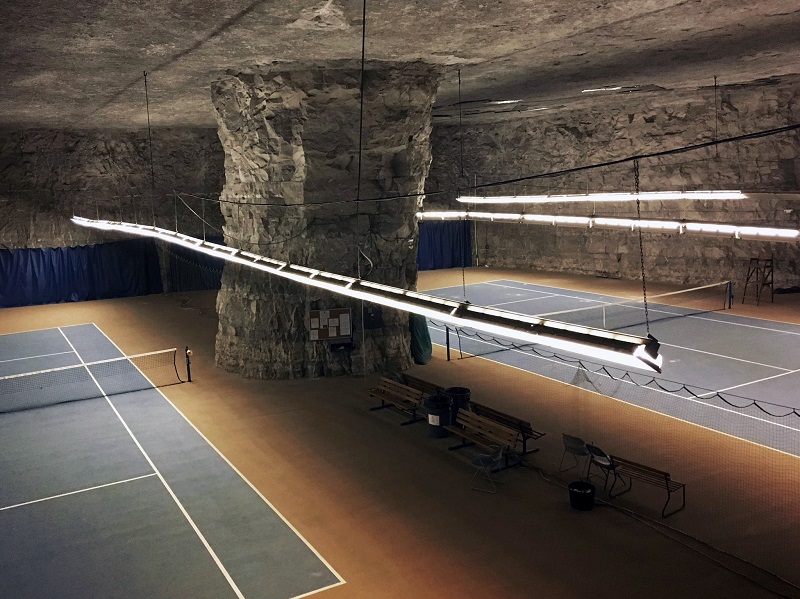 Your game will hit an all-time low (figuratively speaking) if you’re lucky enough to get the chance to play on these courts, located inside this underground cave in Carthage, Missouri. There is no website or social media for this secret, members-only club, but the phone number is (417) 358-2732. I’ll bet if you ask nicely, they’ll at least let you look around.

RELATED:
Maria Sharapova Attends 2020 Vanity Fair Oscar Party, And It's A Hard No From Me 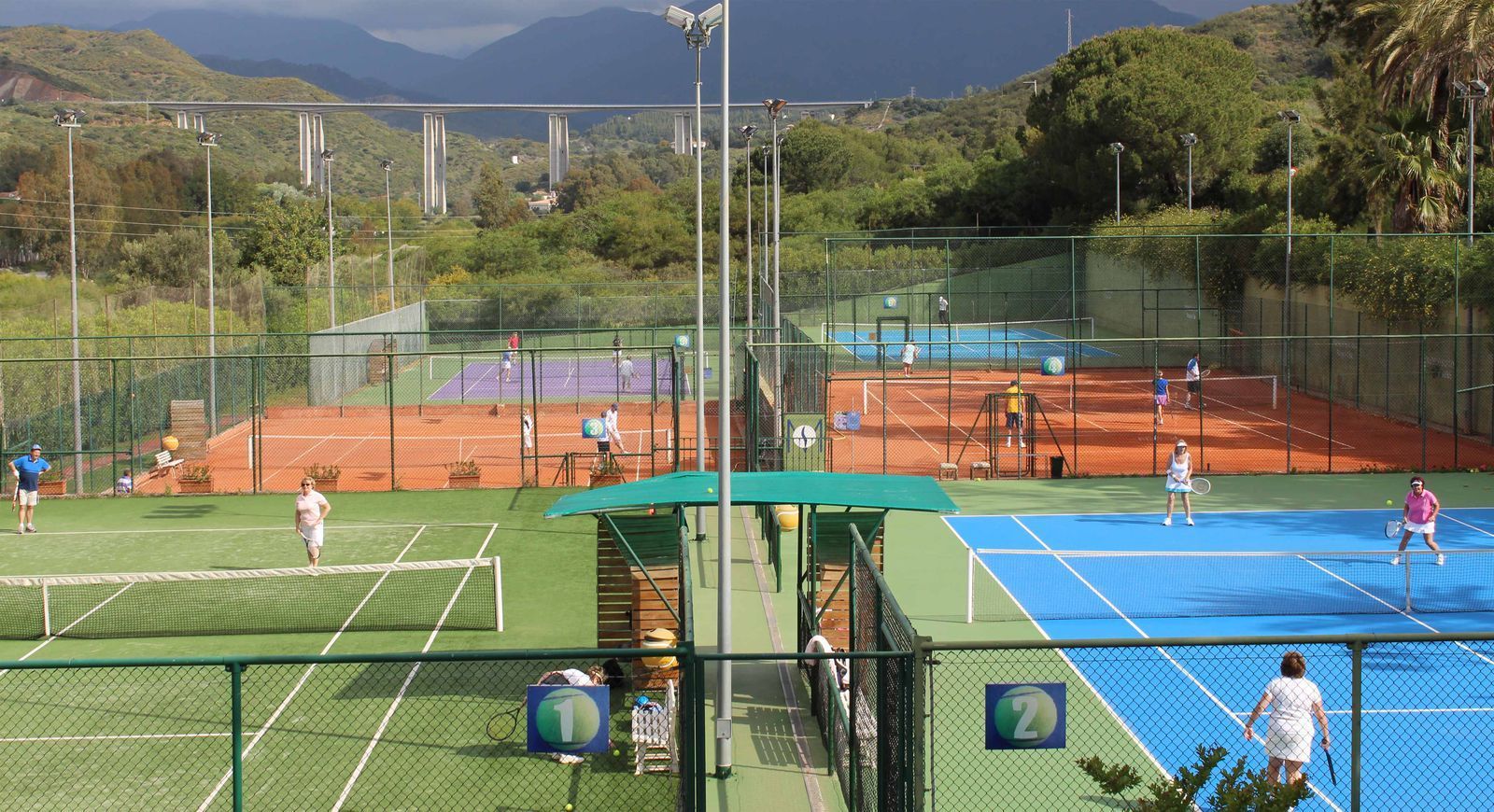 The cool factor of these courts is not so much the actual courts themselves, or their location, but the variety. This multi-level, patchwork-like tennis club was founded in 1997 by Spanish tennis legend Manuel (Manolo) Santana. Inspired by the different surfaces of the Grand Slams, the Manolo Santana Racquets Club has three hard courts as well as two clay courts, and an artificial grass court. 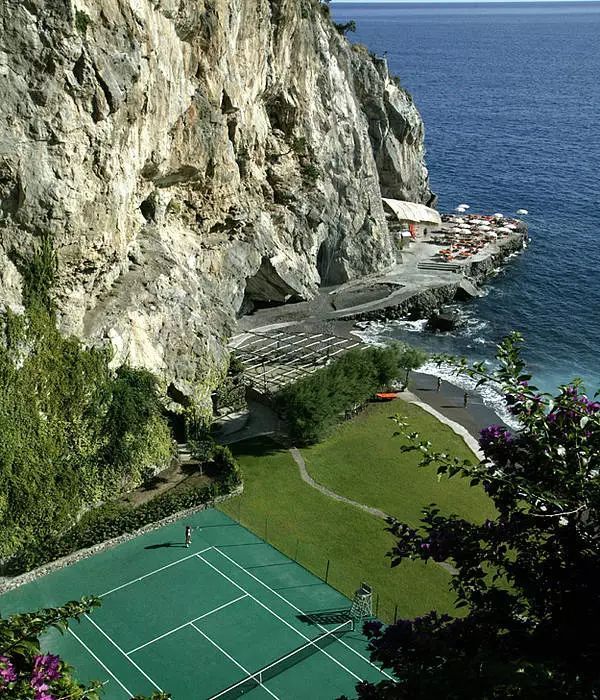 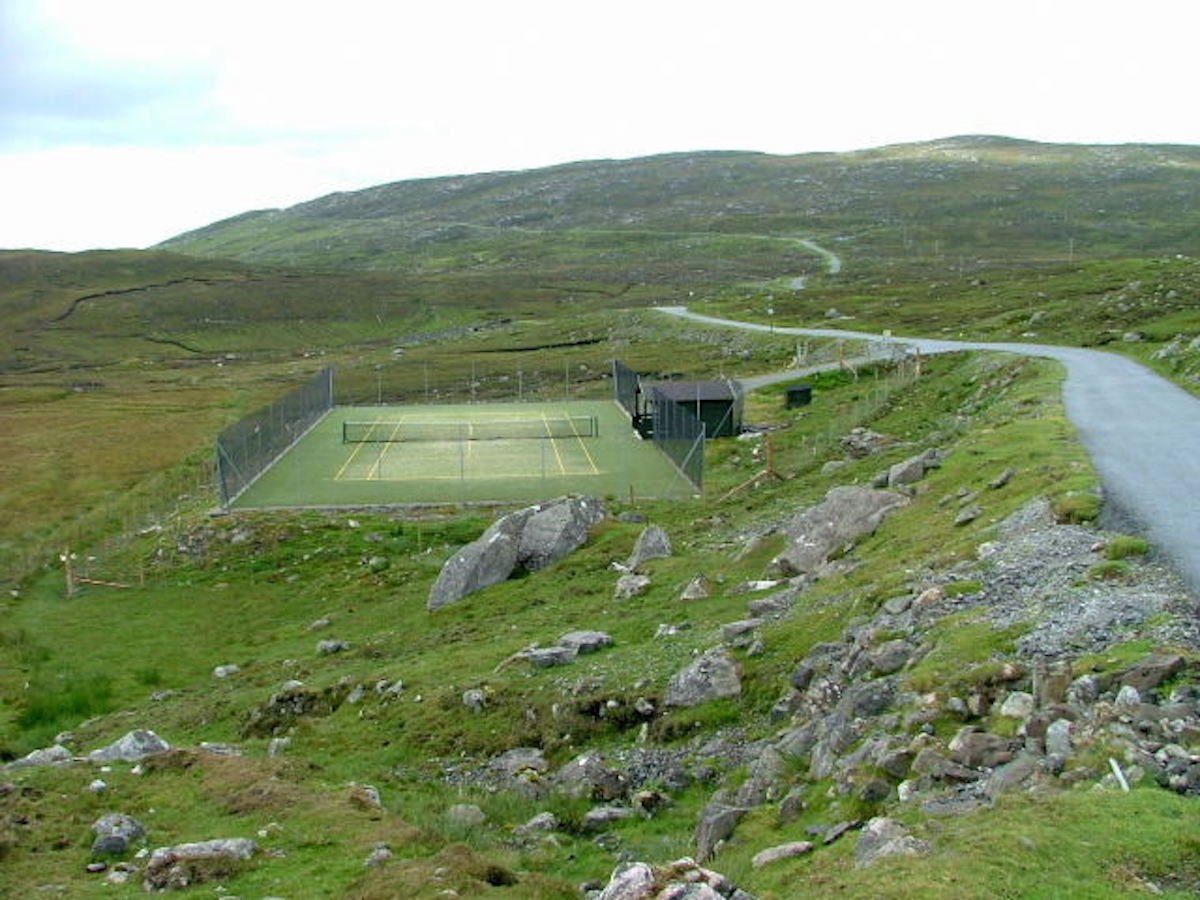 This is definitely not the most beautiful of tennis courts, but it’s still one of the coolest. The Bunabhainneadar Tennis Court is located on the Scottish Isle of Harris, and is known as the most remote tennis court of Britain (and probably anywhere). For £15 (or about $21.50 USD) you can play on this court for an hour and a half. 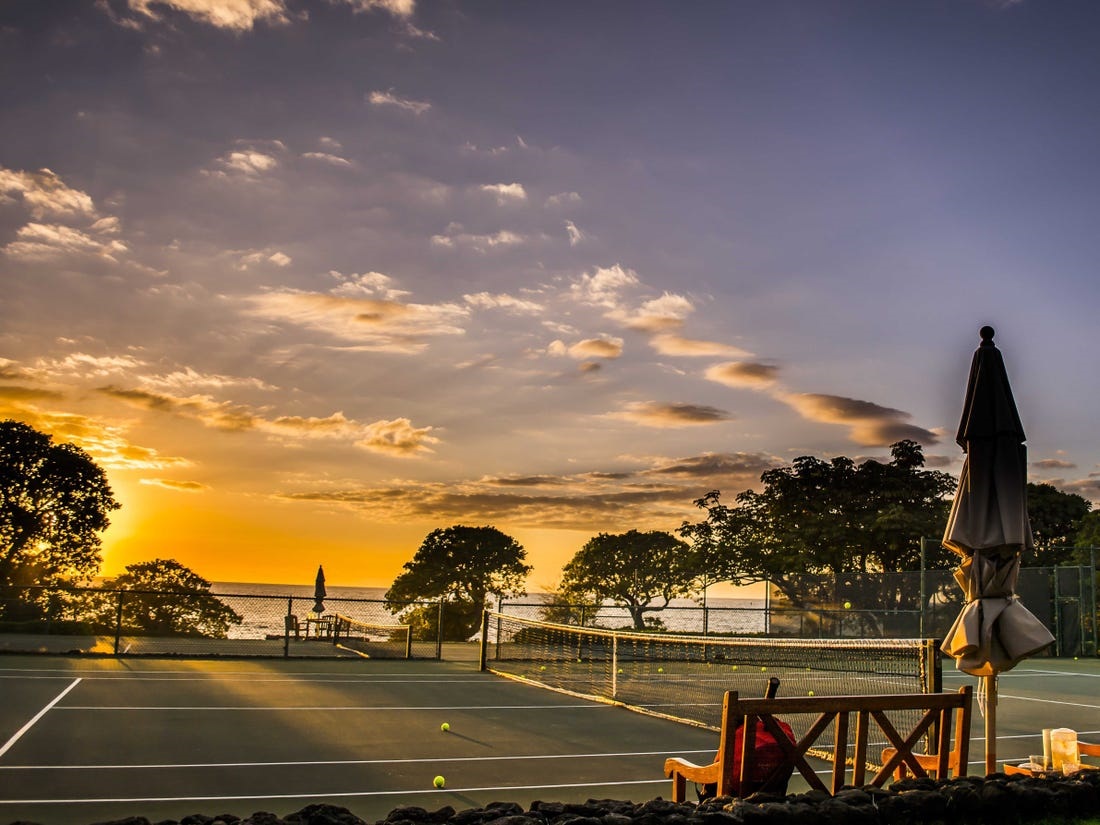 On the coastline north of Kauna‘oa in Hawaii, sits the Mauna Kea Seaside Tennis Club which is part of the Marriott Chain of hotels. Just look at that sunset! 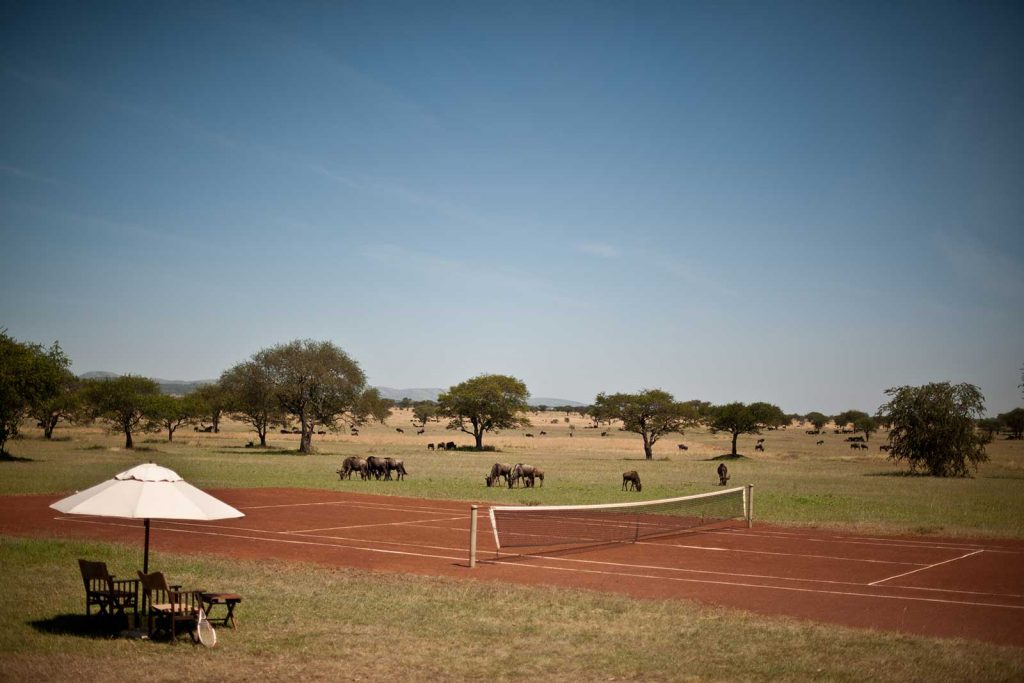 RELATED:
Pre-Order Your Copy Now - “The Master: The Brilliant Career of Roger Federer" 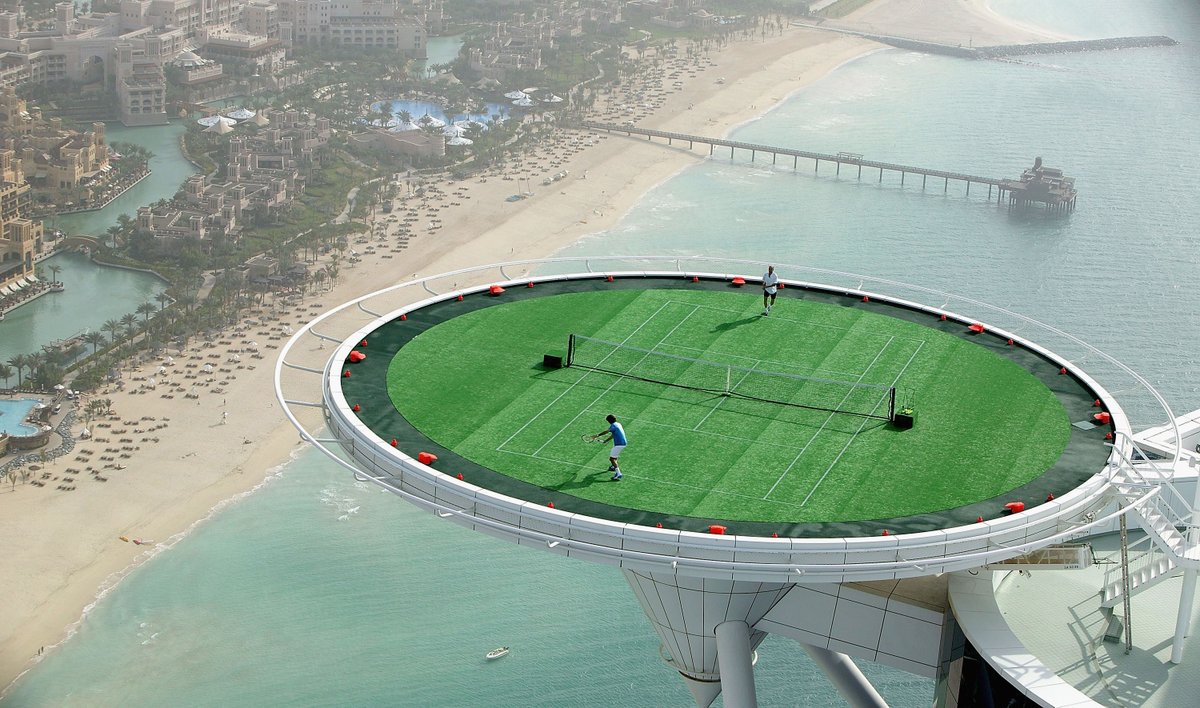 The Burj al Arab is the fourth tallest hotel in the world at 321 m (1,053 ft) and stands out in the water on its own artificial island. It is also home to the highest tennis court in the world, which is 211 meters above the emerald waters of the Persian Gulf. This is one court that requires huge balls in order to play on it – and I don’t mean tennis balls. 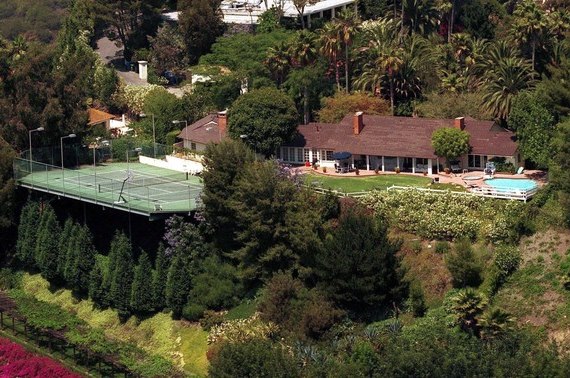 Adam Sandler is an edgy comedian as well as an avid tennis player, so it’s only appropriate that he has a tennis court that literally hangs from the edge of his property in Bel Air, California. Pret-ty, pret-ty, pret-ty cool! 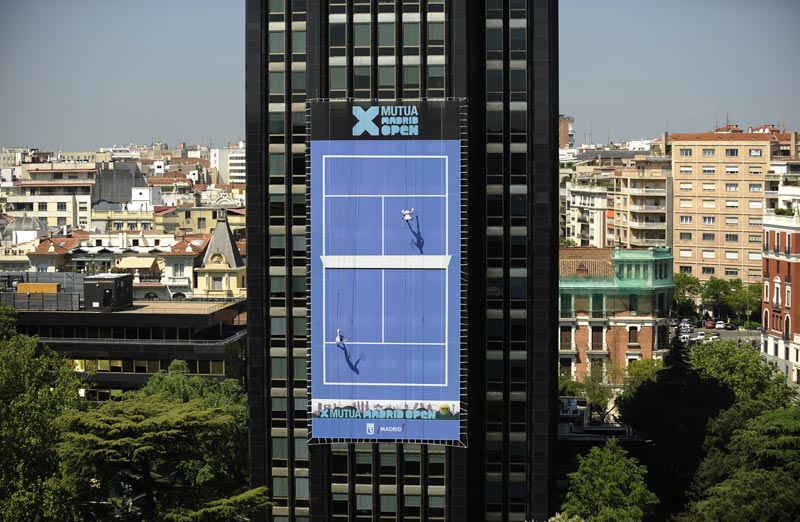 How would you like to play tennis on the side of a building? To promote the 2011 Madrid Open, a special vertical court was created and two stunt players who were secured in safety harnesses actually played tennis, 180 feet above the ground! 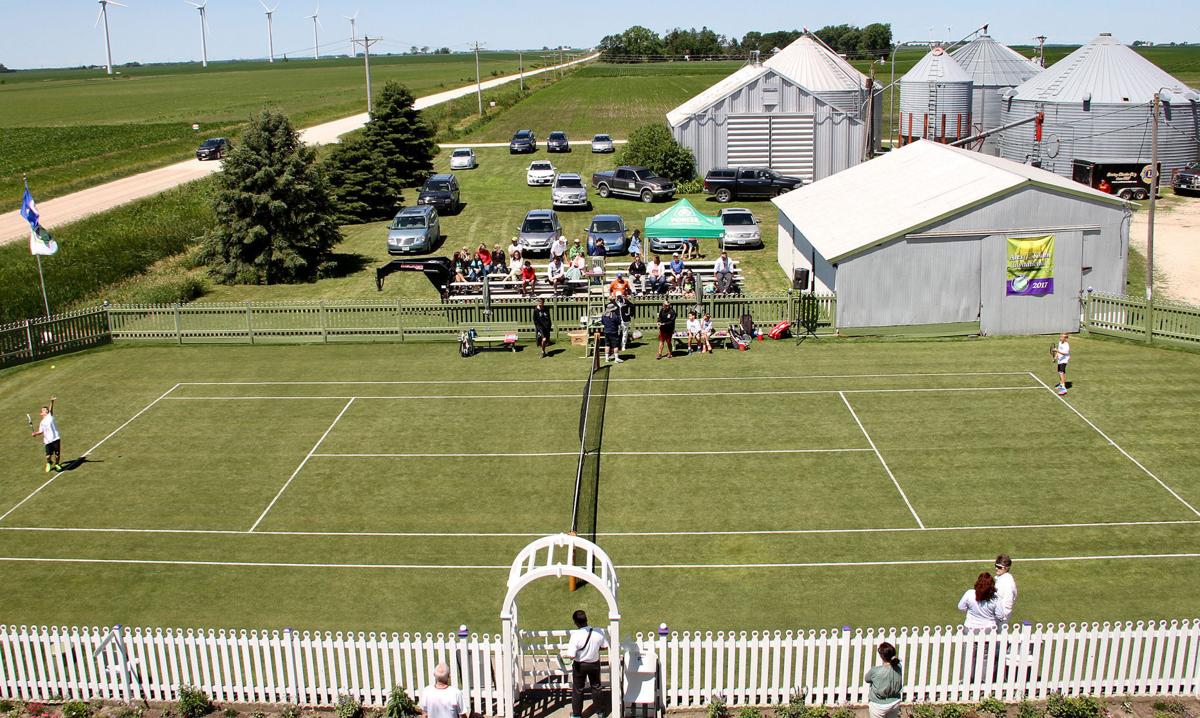 How cool is a lush grass court surrounded by a white picket fence – in the middle of a cornfield? Seriously… sign me up! The All Iowa Lawn Tennis Club is a slice of Wimbledon dropped squarely in middle America. And best of all? It’s free to play on — all you need to do is reserve a court via email. 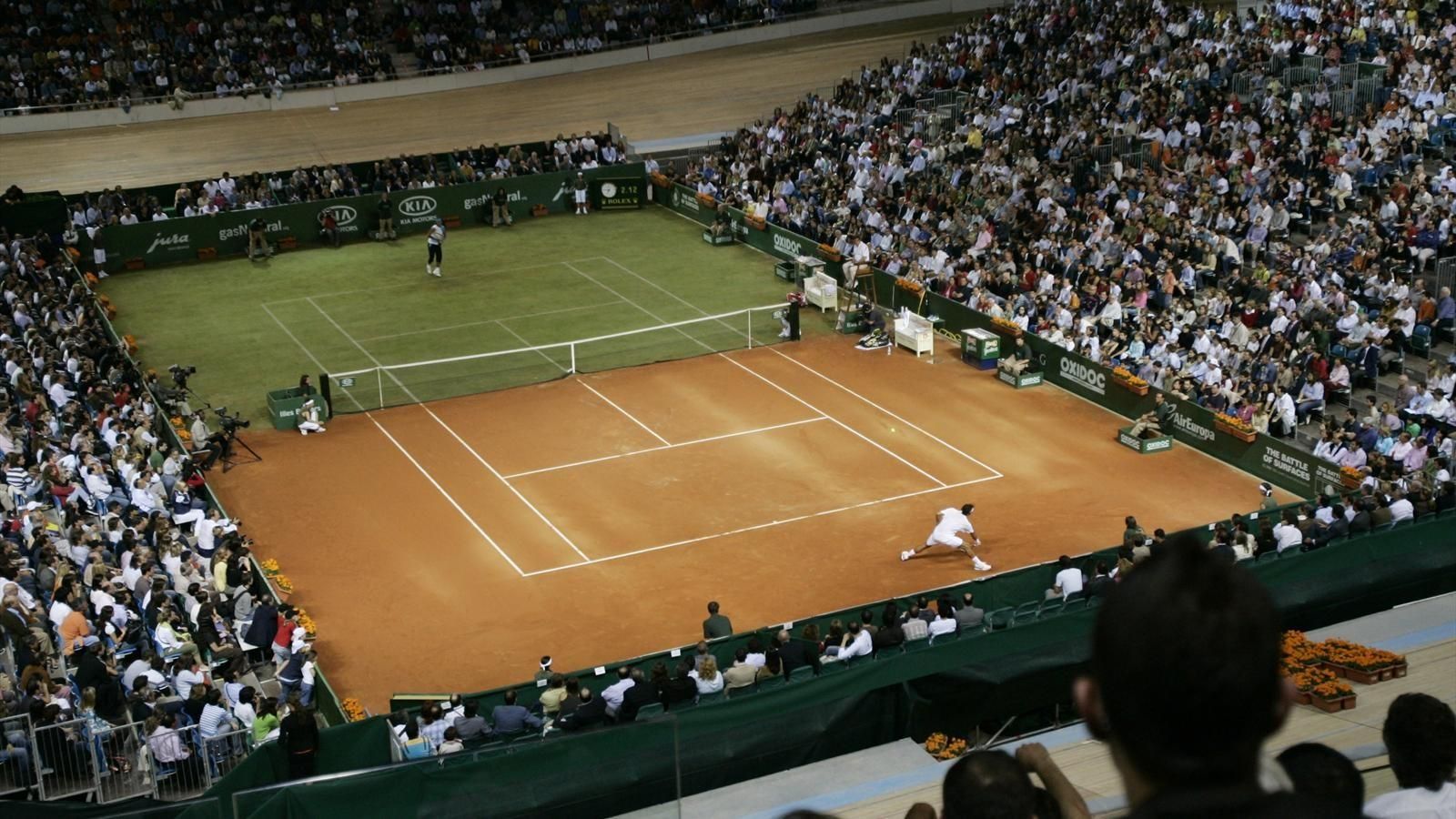 This uber-cool (but temporary) regulation-built tennis court was used for an exhibition match, “The Battle Of The Surfaces”, between Spain’s Rafael Nadal (BOTTOM R) and world number one Swiss Roger Federer. It was an epic battle, ultimately won by Rafa Nadal, 7-5, 4-6, 7-6 (10). 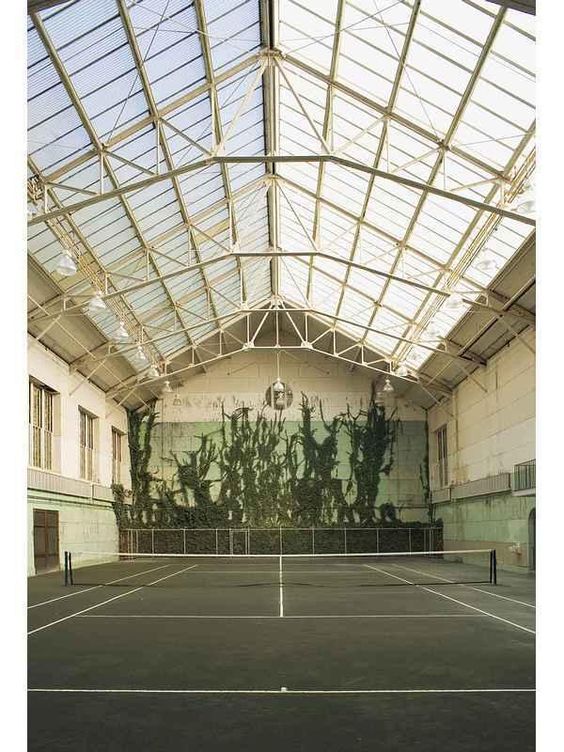 This indoor tennis court in Oyster Bay, NY is one of the most fabulously designed courts I’ve ever seen. The natural light from above, ivy on the back wall, and sea foam green walls would make having a bad set a lot easier to swallow. Yep… I could definitely play tennis here… like, forever.