Novak Djokovic set a tough year behind him with his 2021 Australian Open title. Cameron Spencer/Getty Images

The men’s singles final at the Australian Open 2021 saw two incredible athletes taking on each other, but it was the defending champion Novak Djokovic who prevailed. Daniil Medvedev in front of a hyped crowd at the Rod Laver Arena.

In front of a hyped crowd Djokovic thrashed Daniil Medvedev in straight sets 7-5, 6-2, 6-2 and clinched his 9th Australian Open crown, a record-extending feat for the Serbian.

The first set began in exciting fashion, and every point lived up to the hype. Both athletes worked hard and long, but it was Djokovic who had the last laugh despite Medvedev posting the same amount of winners as him.

Medvedev dominated with his baseline game, but his Serbian opponent proved that experience matters in the biggest stages. He broke Medvedev twice, and the most important break came when the score was 6-5 in favor of the 17-time Grand Slam champion. 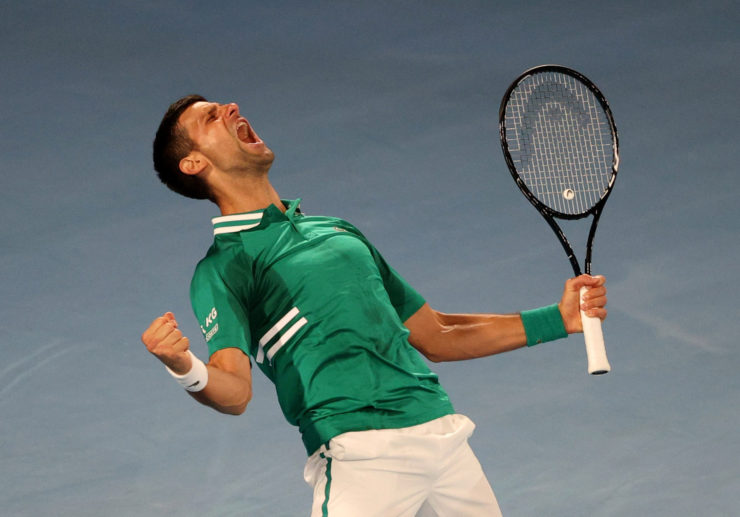 Serbia’s Novak Djokovic celebrates after winning his third round match against Taylor Fritz of the U.S. REUTERS/Loren Elliott

Djokovic won an astonishing 86% of his second serve points and won 100% of his net points to come out on top in the opening set.

Medvedev, who looked strong in the opening set, succumbed to the pressure in his final service game of the set, which paved the way for Djokovic to gain early momentum in the match.

Novak Djokovic displayed his champion mentality in the second set

The first set was intense, but the second was just the opposite. Medvedev lost the mental battle and Djokovic perfectly capitalized on his opponent’s shortcomings.

Though Medvedev broke Djokovic in his very first service game of the second set, the Serbian responded in a similar fashion in the subsequent game.

25-year-old Medvedev stuck to a single game plan, and that’s what put him down. Novak Djokovic used all his experience to put on a show at the Rod Laver Arena and looked flawless with his play.

The Serbian was clinical with his game and converted all of his breakpoints (3/4) that he created in the second set, except one. By this time, Medvedev had already lost his cool and smashed one of his racquets, which clearly illustrated his frustration. 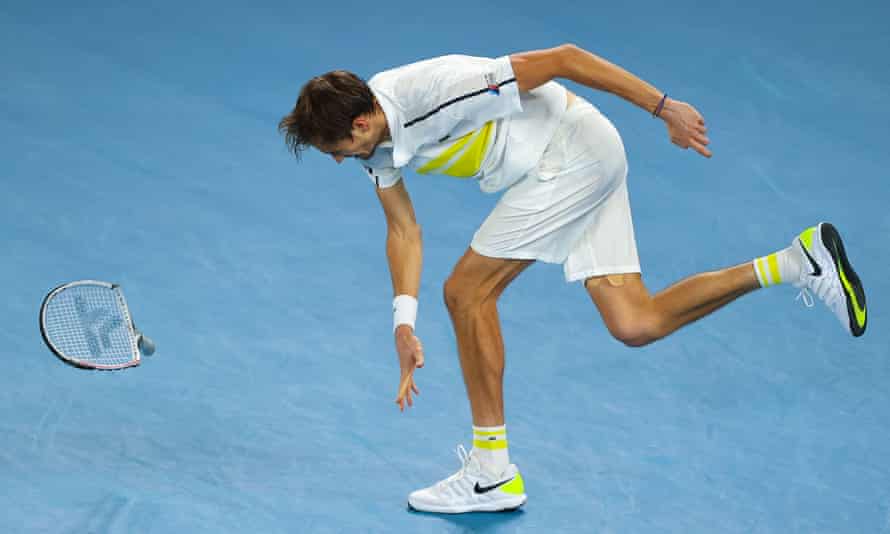 Daniil Medvedev smashes his racket in frustration as the match slips away. Photograph: Brandon Malone/AFP/Getty Images

Daniil Medvedev is feared for his huge serves, but Djokovic brilliantly neutralized the threat with his smart returns, which weighed on the Russian. Djokovic won 75% of his return games depicting just how unsuccessful Medvedev was in the second set.

Djokovic is now 9-0 in the Australian Open Finals!

There was so much on the line for Novak Djokovic when he came into the championship match at Australian Open 2021. But he carried all the pressure under his belt and proved his mettle at his fortress!

Djokovic’s triumph almost seemed like a slap in the face of his haters. He outclassed Medvedev, the only player who proved to be a major threat to his dynasty in straight sets in the finals.

The final set of the match just seemed like a formality as the Serbian monster took it 6-2 and won the match in just 1 hour and 53 minutes.

With this win, Djokovic has now improved his unbeaten streak to 21 matches and has not lost to a Top-10 player in 12 matches at the Australian Open. These numbers clearly prove why Novak Djokovic deserves to be the #1 player in the World!

Here are some of the incredible highlights of the match courtesy of the Australian Open. Enjoy!