If you’ve been playing league tennis for a while, then you’ve probably played against the same teams and/or opponents more than once. Did you remember how they played before you got on the court, or was it a total surprise? Do you think it would be to your benefit to know your opponent’s strengths and weaknesses before the match?

I was talking about one such surprising match with one of my coaches years ago, back when I was a 3.0 player, and she gave me the BEST. ADVICE. EVER. She said to buy a small spiral notebook, and after each match, write down names of the teams and opponents as well as their weapons and/or weaknesses.

So, for example, when we played (and lost to) the Sugar Creek Jams in one of last seasons’ rain make-ups, I wrote this: 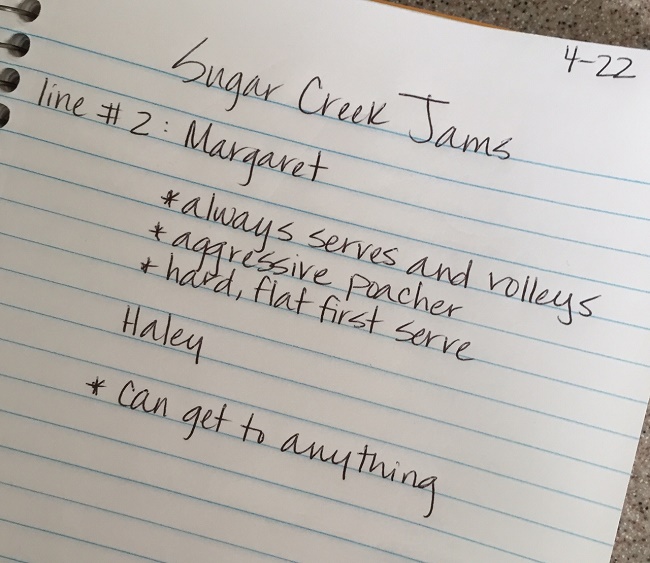 Neither had any real weaknesses, but I did record their strengths.

Well, we have a league match against them again next week, and I guarantee my partner and I will be ready for them! And if they (or one or the other) end up playing a different line, I’ll warn my teammates on that court about their shenanigans.

Now, I don’t do this for every opponent – just people I either lost to, or had a tough time against, or maybe they had some bad-ass tricks that I want to add to my own arsenal.

This doesn’t have to be a notebook, either. I’m actually in the process of transferring my info onto my iPhone because I always have it with me. That way, if my opponents see me on my phone right before the match, they’ll have no idea I’m looking them up (so I can take them down!)

RELATED:
Life While Quarantined: How to Continue Improving Your Tennis Game

I know this seems a bit extreme to those who only play to have fun, but while I also like to have fun on the court, I also like to win. And who knows? My opponents might have a notebook page with my name on it!

Have you ever played the same people again in league, and wished you had remembered how good they were? Do you think having the low-down on your opponent before you played against them is a good thing, or unimportant? Let’s discuss in the comments section below!

You may also like...
Related Topics:general tennis tips, league tennis