“When you see a chance to come to the net, challenge him for a passing shot. You’re so good at the net. Spin, slice… you know, like in the old days!”

Those were Roger Federer’s words of advice to Rafael Nadal after he was broken by Milos Raonic in their singles contest at the 2019 Laver Cup in Switzerland. He then went on to break straight back in the next game, take the set, and win the match.

The exchanges between Nadal and Federer heard by the cameras as they gave advice to Team Europe was one of the highlights of the whole weekend in Geneva. It was a gift that kept on giving over the three days, providing a glimpse into their tactics that viewers have rarely seen before. The two greats seemed relaxed, having fun with teammates while sharing their expertise.

On-court coaching is still banned at all ATP events and Grand Slam tournaments in men’s tennis. Since 2008, female players at WTA tour matches can interact with coaches during changeovers. It was done to add entertainment value and provide insight to the fans watching. 11 years later and the US Open became the first Grand Slam to allow coaching from the stands where players can ask for advice between points.

RELATED:
Bryan Brothers Announce Retirement Ahead Of The US Open

It seems a natural progression to allow this is in the men’s game but there are strong views on this issue with criticism from both former and current players.

The criticism of courtside coaching is that it removes the need for players to think for themselves in a pressured situation. That can make them mentally weaker. Should coaching just be celebrated as an exclusive element of the Laver Cup? Fans are waiting to see how the dynamic works at the international ATP Cup next January, in addition to the new Davis Cup Finals format in November.

In June 2019, Nick Kyrgios made the point that not all players will benefit equally from coaching mid-match.

For guys who don’t have a coach, like myself or guys who can’t afford a coach, it’s not really a level playing field.

Despite Federer being a brainchild of the tournament in honour of tennis hero, Rod Laver, he echoed Kyrgios’ points that it’s a bad idea for the rest of the tour. Novak Djokovic, however, thinks tennis should move forward and allow in-game coaching like so many other major sports.

As Tsitsipas, Thiem, Fognini and Zverev all listened intently to the pair’s advice, fans referred to it on social media as the ‘FEDAL academy’. Imagine if future players could afford to have someone like Federer or Nadal as their full-time coach. Their combination of intelligence, experience and a winning mentality would certainly give players a distinct advantage.

With fans appreciating the access to hear the thoughts of players mid-match at the Laver Cup, the calls for on-court coaching at more events will only get louder. 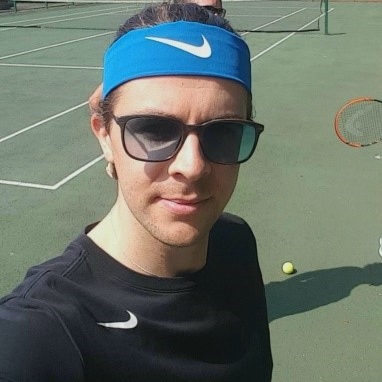 I’m an amateur tennis player and journalist from across the pond. Tennis news is my passion and when I’m not watching a match and sharing live commentary, I’m writing about it, touching on key points and providing some match analysis.