Tennis Life Magazine would like to extend our personal thanks to Jeff Drock, MS, CSCS of Super Fit Tennis and Jim Martz of Florida Tennis Magazine for allowing us to republish this awesome article about tennis phenom Cori “Coco” Gauff.

I am  a Tennis Specific Footwork Efficiency Specialist and Physical Trainer. I have worked exclusively with hundreds of high-level competitive tennis players since 1998. Although I have improved the footwork and physical conditioning for touring pros, college players, ITF players, world age group champions, and national champions, I have certainly never worked with a 14-year-old junior Grand Slam champion prior to working with Cori “Coco” Gauff.

Many people within the tennis community are quite aware that I have been Gauff’s tennis specific footwork and physical conditioning coach since she was 8 years old. Almost immediately after she won the French Open Junior Grand Slam as a 14 year old this past June, people began asking me to give them insight into Coco’s physical training program. Many have also told me that they had heard or read about her never lifting weights and found that tough to believe.

I can tell you that I have certainly never brought her to the gym, and she has not ever done barbell bench presses, squats, deadlifts, hang cleans, power cleans, leg presses, or leg extensions or any other gym machines. I can testify that absolutely no weight training played a role in her obtaining the incredible strength levels in her core, upper body, and lower body.

Look at that Smile of Coco. The stationary lunge/disc touch with foot on a disc drill can be pretty tough on the quads but falling down like Coco did is rediculous. ( She was joking!)

Although Coco has not lifted weights, she has taken part in a very intensive and tennis specific strengthening and movement program since she was 9 years old. Everything was also designed for her particular capabilities and needs.

I am also going to provide you with some insider information about her initial physical development process from when she was 8 years old up until her French Open Junior title. I will also explain what movement efficiency training she did in order to move in a coordinated and specific manner which allowed her to continually beat girls who were much older. Note: I have watched many of her matches and practices in order to continually evaluate and change things when necessary.

I met Coco when she was 8 years old and learning her tennis technical skills from coach Sly Black who is one of the most well-respected tennis developmental coaches in the world. He has trained many national and world champions. He was actually the developmental coach for Sloane Stephens and toured with her.  Sly introduced me to Coco’s parents and let them know that I had been doing a great footwork and physical training job with his two world champion daughters.

Sly initially wanted me to work with Coco in a group fitness setting and I agreed with that plan.  I had seen that her intensity, determination, focus, and fight, was simply beyond comprehension. And those things were quite evident during her tennis training with Sly and during her match play.

The first time I placed her in a group setting my jaw dropped. I certainly was not expecting an 8 year old to work at such a ridiculously high intensity level. I clearly recall her wanting to badly beat even kids much older than her in our agility races. There was just one slight problem. Because she did things at one speed and in super high gear, she would tend to fall regularly and get bloody knees and elbows on the hard courts!

RELATED:
How Gottfried von Cramm Redeems Us, Germans, And Inspires Us Even Today

The same thing was going on when she did point play and sometimes she would get to a ball and simply keep on going onto the next court. We decided that in order for her to lose the nickname “Bloody Knees and Elbows” and just be “Coco” we had to begin doing private physical training.

We initially worked on her deceleration and balance to make certain that her daily routine would not consist of falling on hard courts or ending up on another court after hitting a ball. We added in pre-planned agility and fast little steps to the equation. Next we worked on properly executed sidesteps, crossovers, and big to little step patterns. When she was a few months away from her 10th birthday we added in reactionary agility drills, then emphasized tennis specific movement patterns, and finally tennis specific movement patterns with a reactionary component.

During the early years, her parents listened to the wise words of Sly Black and instead of putting her into tournaments every single week, they would place emphasis on her tennis skills and physical development.

Besides Coco never lifted weights, she only worked out physically between two and four days a week for no longer than an hour. That is really all she needed to get the strength she needed and foot coordination.

The specific goals for Coco’s physical development were to keep her upper body, lower body, and core strong and resilient to injury. Tennis consists of many twists, turns and explosive multi-directional movements and is a year-round sport, so players don’t have the luxury of healing during a true off season.

A sprain is an injury to a ligament and a strain is an injury to the muscle or tendon. Tennis players must make their ligaments, tendons, and muscles in their entire body strong. If one does not take preventive measures then there is a high likelihood that they will get injured!

Yes, in order to make things more difficult we certainly would never shy away from placing different weight vest resistances on her. For our leg strengthening we would focus on various bodyweight exercises that place emphasis on strengthening the hamstrings, hips, glutes, quadriceps, and ankles. Coco is quite strong, and although we do about a dozen or so variations of lunges, we have had to use dumbbells versus just the heavy vest. (Note: She is “lunging” and that is technically not weight lifting! Of course, we also incorporate numerous balance activities into our equation.)

Shown is Cori “Coco” Gauff. She is looking solid with these walking lunges. There were just a few times I had to tell her to come straight up without any forward lean. Not really sure if this is her favorite exercise? If I recall correctly, she asked me if we really needed to do them. I told her that we need to place emphasis on quadraceps stability and knee joint support. She just looked at me like I was from another planet and then proceeded to call me short and bald. This child has a great and fun personality. My bet is that she gets a side job as a talk show host during her tennis career.

Besides injury prevention, a major emphasis of Coco’s physical development has been on her tennis specific movement. Many people do not realize that Coco has amazing natural speed, but that can oftentimes be a double-edged sword. She also has extremely long limbs, which does not make foot adjustments or knee bending naturally occurring or easy to do. It was initially quite challenging for her to get low when necessary on wide balls and serves, to create space for balls hit at her, and to create space for easier balls such as approach shots until we emphasized specific movement patterns.

Those who know me well can assure you that my tennis specific agility and cardio training does not just consist of a few preplanned spider drills, ladder stuff, and some other preplanned agility drills. I emphasize movement patterns that are specific to actual offensive and defensive point play situations during our agility training.

As soon as Coco learned the specifics on how to most efficiently move to the ball and recover, we emphasized plenty of big step little step patterns. I am a bit picky to say the least and have never allowed her to do things in some type of haphazard manner.

Of course we occasionally do the good old classic spider run drills but 85 percent of our movements actually consist of  tennis point or pattern simulations.   All of Coco’s precise step’s and movement patterns have been performed thousands of times during our cone drill sessions. In order to perform the preplanned and/or reactive tennis specific cone drills, she must do the following with full intensity: start with feet moving in an athletic position, have the properly aligned stance for the particular stroke simulation, feet must be balanced and wide, knees are to be bent, racquet set position must be early, our specific footwork big to little step patterns must be used, swings must be directly over the middle of the cone, which simulates the ball strike zone, and feet must adjust to get into that position.

In other words, if at all possible the stroke should not differ and the feet need to set up as early as possible so swings can be made in the strike zone (over the cone).  All this agility swinging at cones stuff may sound easy and fun. It even looks fun, but I have worked with many athletes whose parents had amazing agility and were amongst some of the best athletes ever to play their particular sport. I can assure you that none of them were immediately successful at even performing even  the most basic stationary preplanned drill.

It takes a lot of mental effort to be successful and Coco has put in the mental and physical work to position herself for success. I agree that Coco has many natural gifts, and one might even compare her work ethic and capability to boxing champion Floyd Mayweather.  Some of the things that Coco did when she was only 10 years old (for fun): Mayweather-style sit-ups (from sit-up position to standing up position which takes great core balance and strength), her hand-walking skills are incredible, she will also amaze you with her jump roping and ladder agility.

She is also very close with her parents and grandparents who play a major role in helping her get the things necessary to be successful. Her parents and grandparents have also done an amazing job with keeping church and school a big part of her upbringing. Hopefully, I gave you some interesting insight into the physical training side of 13-year-old US Open junior finalist and 14-year-old French Open champion. 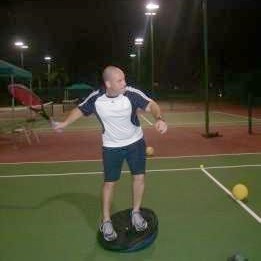 Drock has a Master’s Degree in Sport Behavior and Performance, and numerous other certifications and credentials. For the past 20 years, he has worked alongside several of the world’s top developmental coaches, improving the tennis-specific footwork efficiency and physical conditioning levels of touring pros, junior grand slam champions, world junior age group champions, and national champions in the quickest, safest ways possible. His most famous student was Cori “Coco” Gauff, whom he coached from ages 8 to 14.

You may also like...
Related Topics:Coco Gauff, everything else, guest author, Jeff Drock, motivation, tennis news