Wilson Sporting Goods Co. announced today the launch of the new Triniti™ tennis ball. Triniti is the first tennis ball designed with sustainability at its core while maintaining the high performance levels expected by amateur and professional tennis players around the world.  With the goal of creating an innovative design with less environmental impact, Wilson LABS, the innovation hub at Wilson, used state-of-the-art materials to redesign the core of a tennis ball and its felt cover, substantially increasing the lifespan of a tennis ball, while also enhancing its performance consistency.  Further, Triniti’s packaging is fully recyclable and made from recycled cardboard.

“We see Triniti as a big win for players, the industry, and importantly, our environment. While the tennis ball has not fundamentally changed over 40 years, it has contributed to landfill issues across the world.  We decided to re-engineer the ball from the inside out to be gentler on our world while not giving an inch in performance, actually enhancing it.

ABOUT THE TRINITI TENNIS BALL

Two key engineering elements make up the Triniti tennis ball. First is the core of the ball. Triniti’s core is made from a plastomer material.  This material weighs less than the traditional core of a tennis ball, which allowed Wilson product designers to thicken the core’s walls. For the player, Triniti delivers a higher degree of bounce consistency so that it can stay in play longer, and provides more control, feel and spin. Triniti maintains its “liveliness” – or fresh ball feel – four times longer than a traditional Wilson tennis ball.* 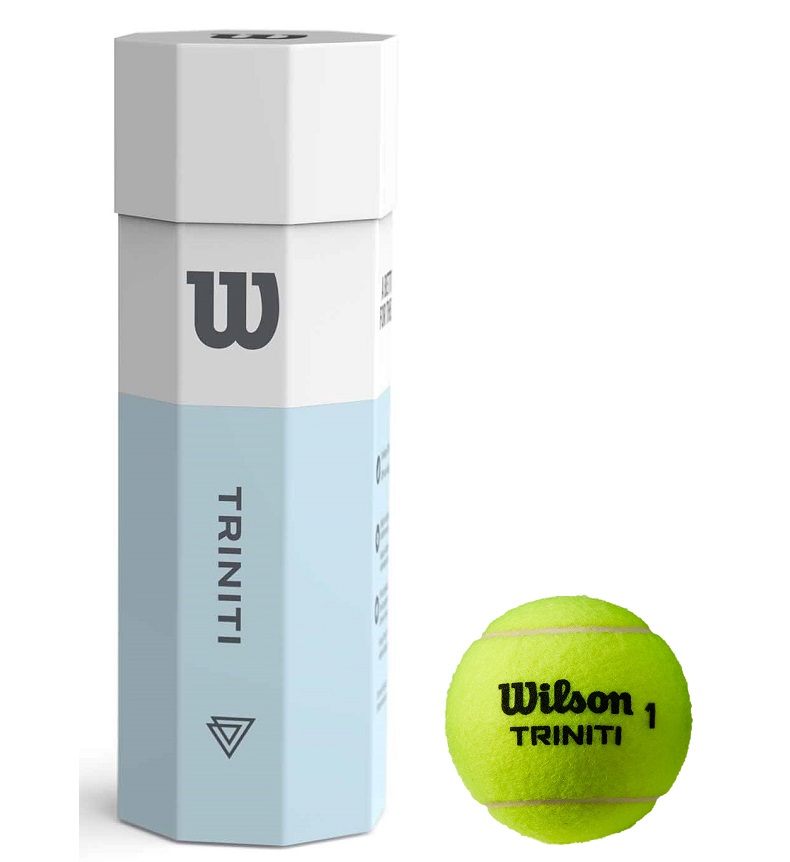 The second element is the felt. Wilson engineers used STR felt, which is 50% more flexible than conventional tennis ball felt. ** STR felt allows for more core compression and longer dwell times. For the player, this increases the time a tennis ball stays on a racket’s strings for enhanced feel and control.

Further, these innovations – in the core and the felt – allow Triniti balls to maintain their longevity and performance without being packaged in a pressurized plastic PET container. Triniti packaging is made from recycled materials and is fully recyclable. This change in product packaging is a landmark moment for the tennis industry.

You may also like...
Related Topics:gear and accessories, tennis gift ideas, Triniti, Wilson