A delicious post-match or post-workout smoothie that's loaded with potassium and calcium which are great for helping sore muscles recover quickly!
Jump to Recipe Print Recipe

I used to do this thing when I was younger where, as soon as movie credits started cascading down the screen, I’d pretend I had transformed into my favorite character from the film (badass gymnast Haley Graham in Stick It, Belle in Beauty and the Beast, The Hunger Games’ Katniss Everdeen). That’s why I was slightly disappointed when I didn’t magically emulate tennis powerhouse Naomi Osaka after I gave her post-workout smoothie a taste test. I mean, I’d done the prep work and everything — even lifted my way through an early-morning 30-minute strength sesh before hitting the court.

Alas, I didn’t gain the agility, speed, and competitiveness that Osaka showcases on the court. Nor did said tennis court have a trophy waiting for me by the net. What I did get, though, was a pretty damn good smoothie. 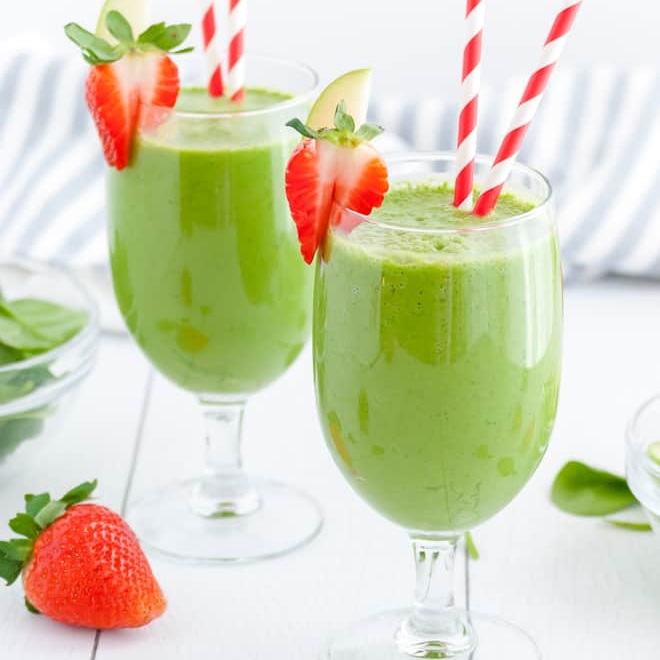 After Osaka sweats it out, she makes her post-workout smoothie that consists of spinach, cucumber, ginger, pineapple or apples (or both), lemon juice, BodyArmor Lyte (either Coconut or Tropical Coconut), and, of course, protein powder. I actually found BodyArmor Lyte in those flavors and more on Amazon and chose the Tropical Coconut.

When blended, the smoothie tastes fresh from the greens, tropical from the coconut and pineapple, and somewhat sweet. The only two flavors of protein powder I had on hand was chocolate and vanilla bean, so I used the latter in the smoothie. Let’s just say that neither of those flavors would be good for that. So, I went out and got some flavorless protein powder and made the smoothie again, and this time, it turned out great. I could really taste the freshness from the fruits and veggies.

I tried and tried again with the perseverance, I dare say, of Osaka. She knows how to rally after a loss. After all, she was the first woman since 1994 to come back after losing the first set of a US Open final. I’ll simply toast to her with this post-workout smoothie :-)

The nutrition facts will vary depending on what protein powder you use.