When I was growing up, my family was fortunate enough to belong to a country club that offered both golf and clay-court tennis. However, there was almost an unspoken divide between the two sports: the golfers almost never went to the tennis courts and the shadows of tennis players would rarely darken the golf course’s greens. The only place the two groups would meet up would be the swimming pool after a long, hot day playing their sport of choice.

But at the club where I give many of my lessons, there’s much more crossover between golfers and tennis players, and I think that’s a great thing. There’s no need to choose between the two sports, as both offer excellent exercise and completely different types of fun. Many of the world’s elite tennis players have also developed a fondness for golf. Here’s a list of some of the most notable:

British-born former world #1 tennis player Andy Murray claims both British and Scottish heritage, having been raised near the birthplace of golf. When he’s not trading serves with archrival Novak Djokovic, Murray can often be found swatting a golf ball around the course with his brother, who’s also a professional tennis player and single-digit-handicap golfer.

Nadal is one of the best golfers on the ATP tennis tour, carrying a more-than-respectable 2.5 handicap to golf courses around Mallorca. He’s said to be a big fan of the Indian Wells Masters ATP tournament as it puts him very close to some of his favorite golf courses. Nadal plays golf right-handed, which may surprise some tennis fans who know him for his distinctive left-handed tennis style. Even more surprising is that he’s right-handed in everything other than tennis! He’s close to ambidextrous but as a youngster trained at tennis from both sides and discovered he was better when playing left-handed. 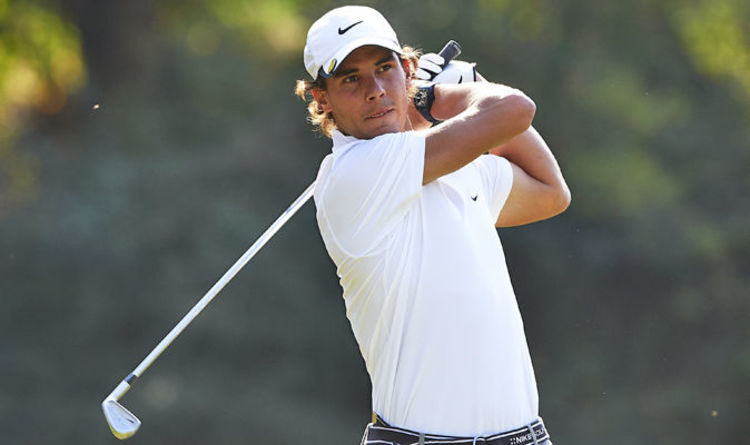 One of the most dominant tennis professionals of all-time, Pete Sampras grabbed the title of #1 in the world and held onto it for an unbelievable total of 286 weeks. But now that he’s retired, you’re more likely to find him dominating his buddies on the golf course than the tennis courts. A proud holder of a scratch handicap, Sampras is apparently just a fan of playing on grass surfaces having won Wimbledon seven times in an eight-year stretch. He’s as deft on the putting green as he was on Wimbledon’s manicured surfaces.<

Swiss maestro of the tennis racket Roger Federer somehow finds the time to hit the golf course fairly frequently between ATP tournaments. Despite having won a men’s-record 20 grand slam titles and holding the #1 spot in the world for a stunning 237 consecutive weeks at one point, Federer plays enough golf to maintain a handicap in the low single digits.

RELATED:
Choking... Oh No! How Do I Pull Myself Out?

Growing up in Switzerland, golf was not a big part of Federer’s life; the Swiss focused more on tennis and ice hockey. But as he started traveling the world for tennis tournaments, he took advantage of the warm weather he found and developed a remarkably solid golf game. While starting golf young is definitely an advantage, if you’re athletically inclined you can pick up the sport anytime and excel.

Serena Williams blew up Snapchat in 2016 when she and Rickie Fowler appeared together in goofy snaps where they enjoyed dessert and Serena repeatedly proclaimed “I don’t like this guy!” All in good fun, of course. The two even suggested swapping golf and tennis lessons, showing that Serena is interested in the game. Perhaps she’ll have a future on the LPGA Tour once she’s accomplished all she can on a tennis court. She certainly has the athleticism to do so.

The ultimate tennis power couple, Andre Agassi and Steffi Graf are now more likely to be found on a golf course together than a tennis court. Though they were both dominant players in their eras, Agassi’s knee problems have limited his tennis time these days. Both of them enjoy hitting the links in their retirement when they’re not focusing on raising their two teenage sons.

I know, I know, some of you may say “who the heck is Scott Draper?” Draper was a journeyman professional tennis player who managed to win 1 ATP tournament — the 1998 Queens Club Tournament — and four Challenge tour titles. He also won a mixed doubles championship in his native Australia’s Australian Open in 2005 with partner Samantha Stosur. But perhaps most impressive is that he also managed to win a professional golf tournament!

Another left-handed tennis player who plays golf from the right side, Draper is so talented at golf that he played professionally full time from 2005-2008 after his tennis career. Unfortunately, a back injury ended his competitive golf career, but not before he won the 2007 New South Wales PGA Championship on the PGA Tour of Australasia. He remains the only athlete ever to win an ATP tournament and a golf tournament on a major professional golf tour. His winning score of -20 over four rounds probably cements his status as the best golfer among tennis players in the world.

Russian tennis great Maria Sharapova tweeted out a few pictures of her first golf lesson in 2015. Swinging the club left-handed, the pictures showed good form but plenty of room for improvement. She’s since been spotted on a golf course with Lexi Thompson, speaking at the ANA Inspiration in 2017. As her tennis career winds down, I’m sure we’ll see more and more of her on the links.

Jordan Fuller is a sports enthusiast, and he loves golf particularly. He also owns a golf publication site, Golf Influence, where he shares tips and guides to help an aspirant to improve the game. Jordan also believes that golf and tennis can go together, as both help in enhancing the strategic capability and improve hand-eye coordination.