The event was organized by world tennis number one Novak Djokovic and was due to continue over the next four weekends, hopping from Serbia to Croatia, Montenegro, and Bosnia, to raise money for charity.

From the beginning, the tour was dogged by criticism. We are, after all, still in the midst of a global health pandemic which has decimated the 2020 tennis calendar.

The tournament that brings the tennis aces together!
13th June – 5th July ?

The best tennis player in the world, @DjokerNole is gathering world class tennis players who will present themselves at the regional Adria Tour event!
⠀
Stay tuned.#AdriaTour #NovakDjokovic pic.twitter.com/1PideRiwjK

While some sports have started to make a tentative return in recent weeks, they have done so with strict social distancing rules in place. But Djokovic’s charity event seemed to ignore such guidelines, with the stands at the Novak Tennis Centre in Belgrade on day one of the tour packed with fans.

Kids stood shoulder to shoulder during the opening ceremony, players hugged post-match just like they used to, and there was barely a mask in sight.

Opening ceremony at the Adria Tour in Belgrade. Social distancing: nonexistent. At least some wear masks, sort of. pic.twitter.com/QQyzBtljNG

It was also noted that during the post-match pressers, when players couldn’t hear a question from a journalist, the microphone was simply handed back from one person to another.

“We have different circumstances and measures, so it’s very difficult to think of international standards. You can also criticise us and say this is maybe dangerous, but it’s not up to me to make the calls about what is right or wrong for health.”

At the time, Serbia had lifted the ban on outdoor public gatherings and the government was recommending people stay only three feet apart. 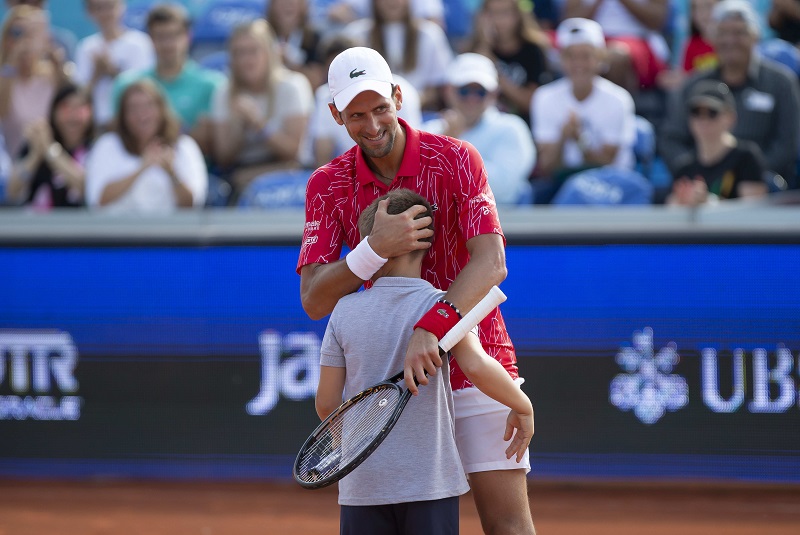 Djokovic has already made his anti-vaccination stance regarding coronavirus clear, writing in a statement in April:

“Personally I am opposed to the vaccination against COVID-19 in order to be able to travel. But if it becomes compulsory, I will have to make a decision whether to do it or not. This is my current feeling, and I don’t know if it will change, but it really influences my profession.”

While a vaccine hasn’t been finalized yet, many experts had suggested world tennis tours shouldn’t restart until there is one.

RELATED:
The Commentators Who Will Be Serving Up The Action From The 2020 US Open

It turns out, they were probably right.

On Sunday evening, three-time grand slam semi-finalist Grigor Dimitrov tested positive for coronavirus, after playing in the Adria Tour on Saturday in Zadar. He posted this on his Instagram account:

Hi Everyone-I want to reach out and let my fans and friends know that I tested positive back in Monaco for Covid-19. I want to make sure anyone who has been in contact with me during these past days gets tested and takes the necessary precautions. I am so sorry for any harm I might have caused. I am back home now and recovering. Thanks for your support and please stay safe and healthy. GD

As the news got back to organizers, a decision was made to cancel the final between Djokovic and Andrey Rublev.

“This is a big shock and an accident after everything went so well. We consulted with all health institutions and the Croatian Government, we followed their instructions, and we had to cancel the final match, because of all these wonderful people and those who were in contact with Grigor in recent days.”

It was announced that all players who participated in the tournament, and those involved in the organization and behind-the-scenes running of the event, would be tested for COVID-19.

“Hi everyone, I wanted to inform you all that I tested positive for COVID-19. I want to make sure anyone who has been in contact with me during the last few days gets tested,” Coric tweeted. “I am really sorry for any harm I might have caused! I’m feeling well and don’t have any [symptoms]. Please stay safe and healthy! Lots of love to all!”

Initially, Djokovic declined testing in Croatia because he “didn’t feel any symptoms” but his team later confirmed that he would be tested upon his return to Serbia.

As the positive tests started to hit the headlines, the outrage grew.

“Boneheaded decision to go ahead with the ‘exhibition’ speedy recovery fellas, but that’s what happens when you disregard all protocols. This IS NOT A JOKE,” wrote Australian tennis star Nick Kyrgios on Twitter.

??‍♂️??‍♂️??‍♂️ Boneheaded decision to go ahead with the ‘exhibition’ speedy recovery fellas, but that’s what happens when you disregard all protocols. This IS NOT A JOKE. https://t.co/SUdxfijkbK

Making headlines for all the wrong reasons.

But things went from bad to worse for Djokovic, as his off-court shenanigans throughout the tour also started making headlines.

RELATED:
Home Of US Open To Become Temporary Hospital Amid Coronavirus Crisis

A minute-long video shows him dancing shirtless next to several players, including Grigor Dimitrov, at Croatia’s Lafayette Cuisine Cabaret Club, which was the first stop on the Adria Tour exhibition tournament.

“Prayers up to all the players that have contracted Covid – 19. Don’t @ me for anything I’ve done that has been ‘irresponsible’ or classified as ‘stupidity’ – this takes the cake,” wrote a furious Kyrgios online.

Prayers up to all the players that have contracted Covid – 19. Don’t @ me for anything I’ve done that has been ‘irresponsible’ or classified as ‘stupidity’ – this takes the cake. https://t.co/lVligELgID

There were also photos circulating of Dimitrov, Djokovic, and other tennis players, playing basketball when they weren’t on the court.

Again, with not an ounce of social distancing in sight. 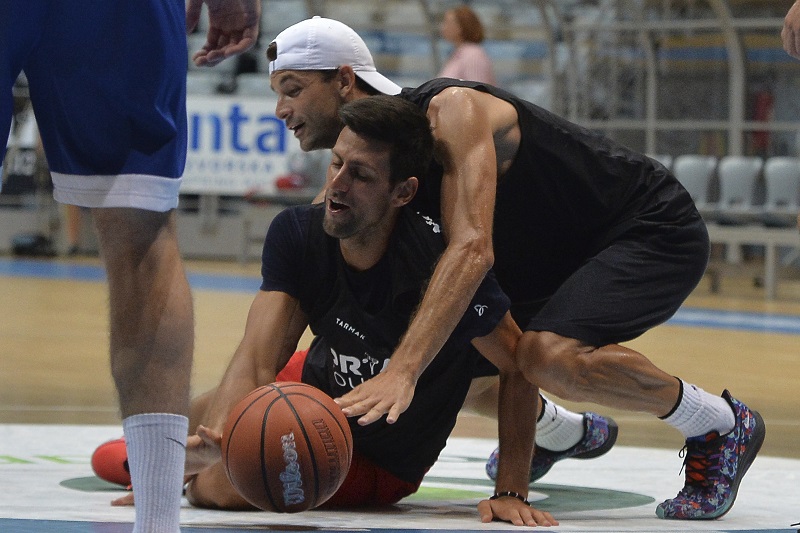 In this photo taken on Thursday June 18, 2020, Bulgarian tennis player Grigor Dimitrov, rear, plays basketball with Serbia’s Novak Djokovic in Zadar, Croatia. Dimitrovsays he has tested positive for COVID-19 and his announcement led to the cancellation of an exhibition event in Croatia where Novak Djokovic was scheduled to play on Sunday, June 21 | PHOTO SOURCE: AP

Back in Belgrade, Djokovic and his wife Jelena both tested positive for the deadly COVID-19 virus, with the news breaking late yesterday.

The world number one confirmed that he was asymptomatic and isolating for the required 14 days. The couple’s children returned negative tests and Djokovic expressed his sympathies for any hurt caused on Twitter:

“We believed the tournament met all health protocols and the health of our region seemed in good condition to finally unite people for philanthropic reasons. We were wrong and it was too soon. Everything we did in the past month, we did with a pure heart and sincere intentions.”

Andy Murray also spoke up, adding to the mounting criticism facing the tennis world number one:

“In hindsight, what has happened there is not a good look. It’s important that top athletes around the world should be showing that we are taking this seriously and knowing that we are using social-distancing measures, like when I’m getting treatment from my physio while wearing masks just to reduce the risk as much as possible.” 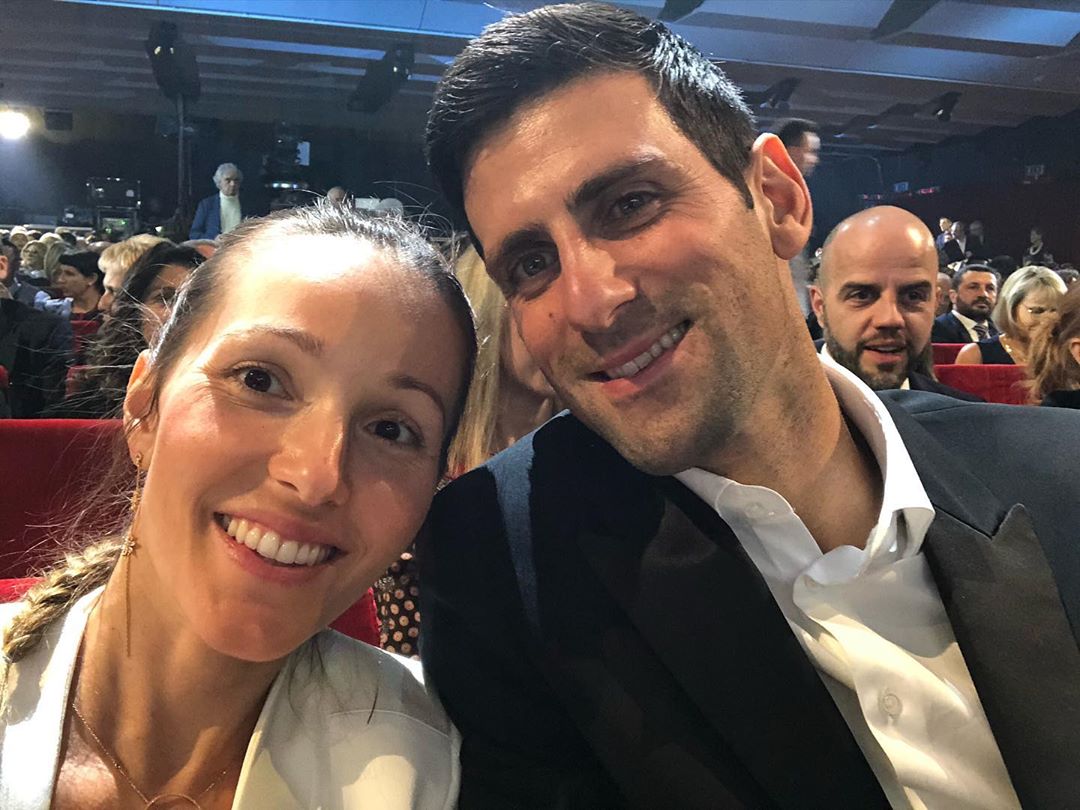 The positive tests have raised serious concerns for the governing bodies of tennis in their bid to restart the sport.

Last week, the ATP and the WTA issued revised calendars for the resumption of the circuit from August, while organisers of the US Open said the grand slam will be staged without fans starting on August 31.

Given the disastrous Adria Tour, and the lack of awareness from the players involved, those events are now in serious jeopardy.

Tennis Careers That Sparked But Never Flamed
On The 2020 US Open, Former Wimbledon Champion Marion Bartoli “Can’t Really Call It A Grand Slam”